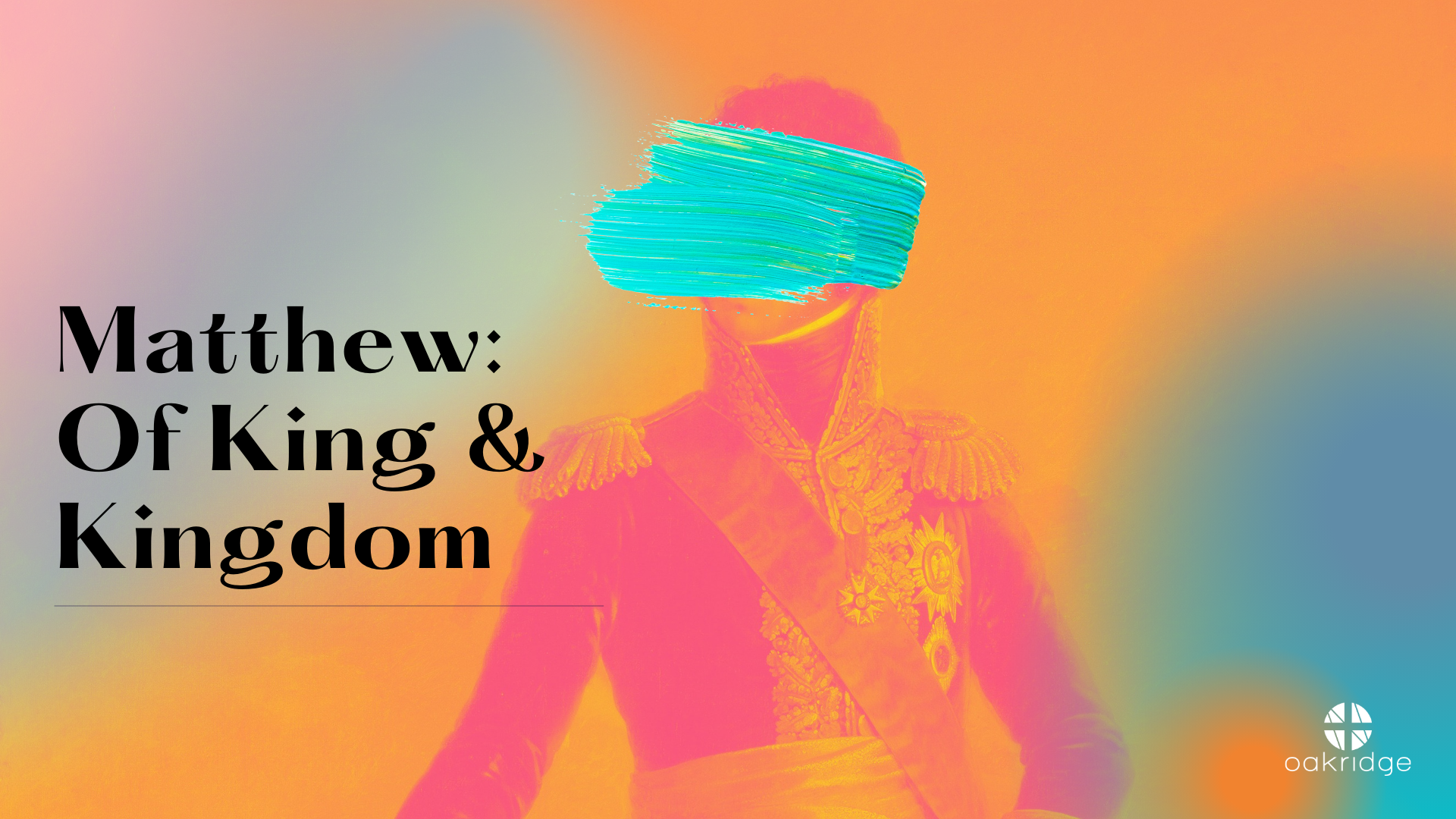 There are few more offensive concepts to the sensibilities of our contemporary culture than that of submission—the act of knowingly, willingly, intentionally, and repeatedly placing ourselves, our wills, and our preferences under the authority of another. It is considered a distasteful mark of powerlessness, hopelessness, shamefulness, and oppression. Success, according to many, means having others answer to you. True liberty is found in the freedom from ever having to bow to anyone. Truth is something created, not something objective to which we must yield. Ultimately, submission is something to be avoided and condemned.

There are few more offensive concepts to the sensibilities of our contemporary culture than that of submission—the act of knowingly, willingly, intentionally, and repeatedly placing ourselves, our wills, and our preferences under the authority of another.

In our world, success, according to many, means having others answer to you. True liberty is found in the freedom from ever having to bow to anyone. Truth is something created, not something objective to which we must yield. Ultimately, submission is something to be avoided and condemned as a distasteful mark of powerlessness, hopelessness, shamefulness, and oppression.

Today we’re in the second of a two part study of Israel’s formal rejection of the King, a section introduced by the cursed fig tree (21:18–19). The tree represented Israel, covered with leaves of religiosity but lacking the fruit of faith, a faithlessness seen in their opposition to Jesus.

So, here’s what I want to do today: I want us to start by noting Jesus’s opposition. Next we’ll talk about the missing submission. And, finally, we’ll notice the motivation for submission.

In this text, Jesus endures three rounds of opposition from Israel’s leadership. Just like he was challenged by the chief priests and elders back in chapter 21, so Jesus is attacked by more groups in chapter 22. Round one is with the Pharisees and Herodians.

[vv 15–16a] Entrapment’s the goal. The Pharisees aren’t coming to learn but to expose. And their zeal is evidenced by an unlikely alliance. See, Pharisees were purists, hardcore keepers and preservers of the Mosaic law and tradition. Herodians, however, were pragmatists, favouring cooperation with Rome, Israel’s occupying nation. These groups didn’t have a lot of common ground, except for their hatred for Jesus. The enemy of my enemy is my friend, right? They’re conniving, manipulative wretches. Listen to their sanctimonious venom. [v 16b] Yuck. Jesus sees right through them. [v 18]

Then comes round two. [v. 23] That they don’t believe in resurrection is an important detail because it explains the theological riddle they’re going to give Jesus is moment. But, more than that, it again shows an unlikely alliance. The Sadducees and Pharisees had huge differences in theology but, at least for a moment, they’re unified in their opposition to Jesus. Again, Jesus sees right through their ignorance. [v. 29]

Finally, round three. [v. 34] Though united against Jesus, the Pharisees can’t help but enjoy the humiliation of the Sadducees. Perhaps renewed in their swagger, they take another crack at Christ, this time sending an expert in the law. [v. 35]

Three rounds of opposition. Jesus, the long-awaited King of Israel, is maliciously, strategically, and relentlessly opposed by their leadership, a leadership exposed here as hypocritical and ignorant.

This is the same reason Jesus is rejected 2000-years later. Unbelievers are either ignorant to his claims and identity or so full of pride and idolatry that they settle for that which is perishing. Nothing’s changed.

And today we can watch as seemingly incompatible groups unite in their anti-Christ sentiment. If you went onto a university campus and declared “no one comes to the Father but through the Son” you would find a pretty mixed group opposing you: scientists and philosophers, feminists and trans-rights activists, capitalists and socialists, agnostics and muslims. So many differences but united in opposition to Jesus Christ. Welcome to the club, here’s your membership card. That’s what was happening in the 1st-century.

Just as there were three rounds of opposition, so there are three manifestations of submission. The first is a submission of ourselves. [v. 17] In theory, Israel was a theocracy, a nation ruled by God. But now Rome was bossing them around, playing God’s role. Surely, “the Messiah” would hate that and be against paying an occupying army. And, when he says as much, he’ll be in trouble. Perfect!

How does Jesus respond? [vv. 19–22] It’s important to notice that Jesus replaces the verb they use with a stronger one. They say, [v. 17b], to which he responds, [v. 21b]. To give assumes it can be withheld, as providing employees Christmas bonuses. It could be a good thing to do but, ultimately, is optional. To render is to present what’s owed, as a mortgage or car payment. So, his opponents ask, should we give to Rome what’s rightfully ours? Jesus answers, give to Rome what is rightfully Rome’s. It’s not yours.

Many struggle with submitting to governments, employers, elders, spouses, teachers, or any other authority. We may justify dissension by pointing out incompetence, inconsistency, hypocrisy, or stupidity. But, for the people of God, we need to be careful. Because a lack of submissiveness anywhere is often symptomatic of a lack of submissiveness to Christ.

We belong to God. His image is upon us. We’re to be a people that willingly submit all we are to him and, when we do that, submitting to earthly authorities he’s allowed to rule is less of an issue.

The second manifestation is a submission of our futures. While Israel was showcasing opposition, Jesus calls for submission, first of ourselves and second of our futures. The Sadducees, who didn’t believe in resurrection, pose this riddle to Jesus. [vv. 24–28] “Ha-ha, resurrection is stupid. Look at all the social complications it would cause if it was real. Just face it: when we die, that’s it.” Jesus, as we read, tells them they’re wrong because they’re ignorant to God’s word (which teaches resurrection) and God’s power (that he’s capable of resurrection).

In verse 30 we get a rare glimpse into post-resurrection life. [v. 30] I’ll be honest, I don’t really know what this means. In some way, marriage is going to be perfected in what it ultimately typified—the marriage of Christ to his people. So, we’ll be like angels in that they don’t marry. (Sadducees didn’t believe in angels either, so this another jab at their theology.) But, really, I think the point here is that they’re asking the wrong question and Jesus gets to the real issue in the next verse.

[vv. 31–33] Jesus quotes from Exodus 3, showing that the patriarchs, though dead, are alive. God wasn’t just their God in the past when they were on earth, he’s is their God now. They’re alive. And if God is powerful enough to keep them alive, though dead, then he’s powerful enough to raise them again. The Sadducees don’t know God’s word or God’s power and, so, they’re unwilling to submit their futures to either.

[2 Cor 5:1–8] The future for those who trust in Christ is life after death in the presence of God and then resurrection. He’s said so in his word and he’s powerful enough to do it. The question is, are we willing to submit ourselves to that future or, like the Sadducees, are we going to oppose him?

Jesus says that if fill your heart with an all-consuming love for God and dedicate yourself to loving other image-bearers the way you love yourself, all the other laws fall into place. “Don’t lie, commit adultery, and steal” are taken care of if you love God and love others.

The Pharisees, so wanting to take Jesus down, are exposing their own blindness in the process. They’d missed the whole essence of OT teaching. They were concerned with garment fringes and ceremonial washings but they missed love. Their hearts were for leaves not fruit. Their affections were not submitted to God and, because of that, they opposed God.

Jesus, going three rounds with Israel’s leadership, exposes their unwillingness to submit themselves to the God that owns them, their futures to the God who secures them, nor their affections to the God who loves them and sent them his Son.

Subjects of the coming King are to be characterized not by opposition but submission. But, let’s be real: That’s hard. It’s unnatural. How on earth can we become an increasingly submissive and, thus, God-honouring people? Well, our passage closes with the motivation.

Now, here comes Jesus’s riddle. [v. 43] Notice Jesus’s affirmation of the dual authorship of Scripture: David in the Spirit. [vv. 44–46] Messiah is the son of David but David, the king of Israel, calls Messiah Lord, or Master. How does that make sense? It’s a riddle they can’t solve, tragically, because the answer is standing right in front of them.

Jesus is the Son of David, coming from David’s line. He is Messiah. And, at the same time, he is David’s Lord, his master. And, as Psalm 110 says, Yahweh says to Messiah, sit at my right hand—a place of honour and authority—untilI put your enemies beneath your feet.

In this riddle is our motivation for submission, brothers and sisters. We are to be a people of submission because of who Jesus is and because of what Jesus is coming to do. When we understand that he is Messiah—the promised Deliverer, Redeemer, the eternal one, and the one with all authority who is, at this moment, seated at the right hand of God the Father—we’ll be increasingly ready to submit. It’s when we lose sight of who he is that our rebellion starts to rise.

And it’s when we understand what he’s coming to do—that there is coming a time in the future, when his enemy’s are defeated, that he is going to return to rule forever as the righteous King—we’ll be increasingly ready to submit. It’s when we lose sight of what’s coming that our rebellion starts to rise.

Submit to the King,for the King, and like the King!

It’s because Israel, represented by their leaders, failed to comprehend who Jesus was and what he was going to do that they didn’t practice submission but opposition. We want to, again, learn from their mistakes and, instead, Submit to the King,for the King, and like the King!

We submit ourselves, our futures, and our affections to him because he’s authoritative creator, sustainer, Saviour, Master, and Lord.

We submit ourselves, our futures, and our affections for him because that’s how he gets all the glory and his name is made great and his reputation is propagated.

We submit ourselves, our futures, and our affections like him because he laid it all down, submitting to the will of the Father to suffer and die, for our sake. In fact, there are few moments that you and I are ever more like Christ than when we are submitting ourselves to unjust, imperfect, inconsistent authorities.

We’re being invited today to check our hearts, brothers and sisters. Is there any opposition creeping around in there? Maybe it’s manifesting itself in a bit of rebellion against government, teachers, church leaders, or parents. Check your heart. Submit to the King, for the King, and like the King! It’s through submission that comes reward, glory, life abundant.

Josiah has served the Oakridge Bible Chapel family as one of its elders and one of its pastoral staff members since September 2018, before which he ministered as an associate pastor to a local congregation in the Canadian prairies. Josiah's desire is to be used by God to help equip the church for ministry, both while gathered (edification) and while scattered (evangelization). He is married to Patricia, and together they have five children—Jonah, Henry, Nathaniel, Josephine, and Benjamin.